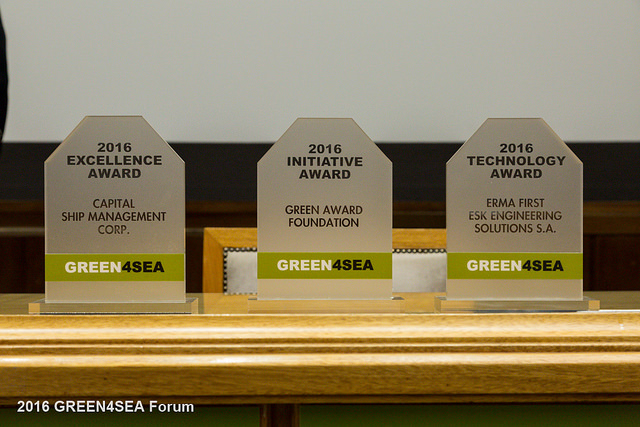 GREEN4SEA announced the winners of the inaugural GREEN4SEA Awards for 2016 at a prestigious awards ceremony during the 2016 GREEN4SEA Forum which successfully concluded on Wednesday 6th of April 2016 in Eugenides Foundation Athens attracting 950 delegates from 20 countries representing a total of 400 organizations.

Apostolos Belokas, Founder and Managing Editor of GREEN4SEA thanked the 1,500+ voters to the set of the awards and expressed his satisfaction for the open nomination, the shortlisting and the open vote procedure that concluded the final award recipient for each award. 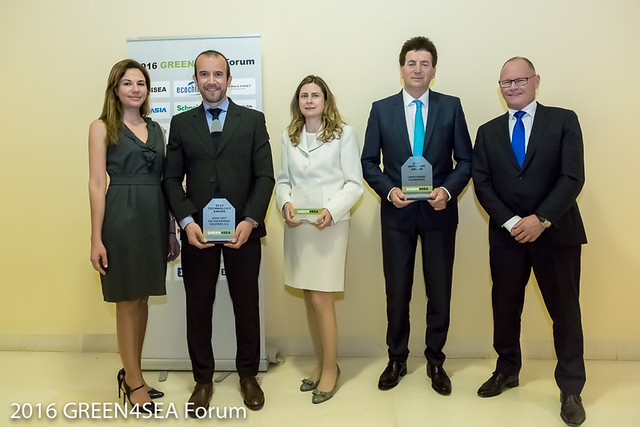 Winner
Capital Shipmanagement Corporation
For company’s strategy with a focus on environmental performance and the joint project with LR and DSME to examine LNG as a fuel and its use on an ultra-large containership design.

It is a great honor for us to receive this award and we would like to thank all those voted in our favor. This award reflects the ongoing efforts of our people onboard vessels, as well as the Company’s long term commitment to safety and environmental excellence standards.

Winner
Green Award Foundation
For providing incentives to attract quality and green ships by its Green Award Scheme which certifies ship managers and vessels that go beyond the international conventions and legislation in terms of ship lay-out and equipment, quality of operations and management.

We are grateful to all those voted in favor of Green Award as we try our best to connect the industry stakeholders striving beyond statutory requirements. Green Award is providing a platform for the industry-wide Corporate Social Responsibility for all Ship managers, ports, maritime service providers and charterers to work together for the benefit of safety, quality and environmental excellence. The collaboration between these stakeholders is what makes Green Award a special initiative.

Green Award indeed has become what it is now due to efforts and cooperation of all its participants. We certify ships and ship managers with outstanding performance having aside the support of our incentive providers: ports and maritime service companies that make it all possible. Their rewards and incentives provide the motivation to strive for excellence. We would like to thank all those voting in our favor, their support is what helps us to address new challenges.

This award is the result of ERMA FIRST’s consistency. Focusing on the development and design of BWTS, we have developed a unique technology and not a collection of bits and pieces of equipment. Secondly, we have launched a product ready for shipboard installation and not just a concept. Lastly, it is a result of technology superiority. ERMA FIRST is a Greek company competing on an international environment. Thanks to the Greek ship-owners but also the engineers who act like consultants in the continuous optimization of our system.

About GREEN4SEA Awards
GREEN4SEA Awards are part of the GREEN4SEA Conference within the scope of fostering Excellence & Sustainable Shipping. The process to be employed is a combination of open nomination and vote. The award categories are:

GREEN4SEA Excellence Award
To be awarded to any person or company that demonstrated environmental excellence and performance above average in any aspect of maritime activity.

GREEN4SEA Initiative Award
To be awarded to any person or company that sparked, realised, or significantly contributed in any initiative fostering environmental sustainability for the shipping industry.

GREEN4SEA Technology Award
To be awarded to any person or company that provided a significant technological achievement or breakthrough or significant contribution in any aspect of environmental maritime activity.

Notification procedure is initiated few months ahead of the event with an open invitation to the industry stakeholders to propose nominations online via relevant form at dedicated awards page. Shortlisted nominees are announced within a week after nomination submission is concluded and open vote to declare the winner of each category is available for a period of three months through relevant application at dedicated awards page. Winners are announced during awards ceremony at the completion of the GREEN4SEA conference.