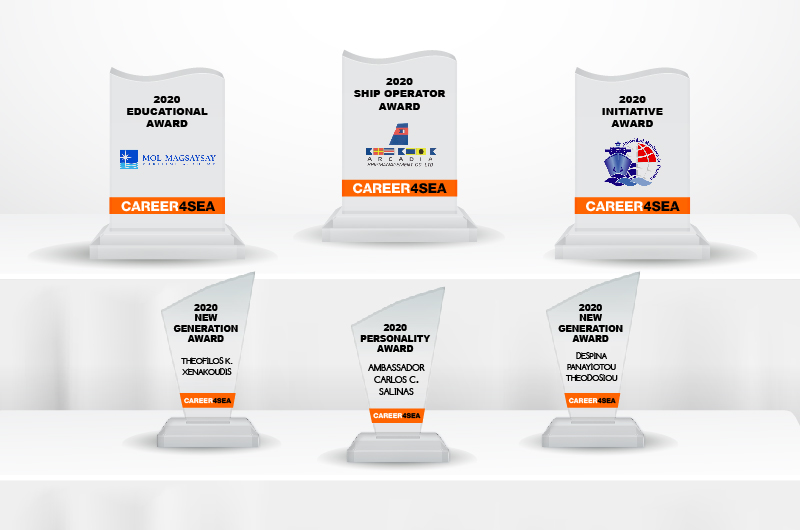 SAFETY4SEA announced the winners of the 2020 CAREER4SEA Virtual Awards on December 16th , recognizing industry’s outstanding practices for attracting and supporting the younger generation in the maritime industry.

The winners of the 2020 CAREER4SEA Virtual Awards are:

MOL Magsaysay Maritime Academy received the 2020 CAREER4SEA Educational Award for being a premier maritime higher educational institution in the Philippines and the Asia-Pacific region which produces globally competitive maritime professionals through relevant, progressive, and unparalleled education founded on the virtues of excellence, discipline, and service.

MOL Magsaysay Maritime Academy (MMMA) is a joint venture between the Magsaysay Group of Companies and Mitsui O.SK. Lines. MMMA is a premier maritime higher educational institution in the Philippines with the vision to develop the future leaders of the maritime industry. MMMA continuously invest in technologies and innovations that provide students with the best learning methods and practical experiences. The ship-in-campus looks like a real ship offering a simulated learning experience to students. Courses in the Academy are facilitated by experienced instructors with the aim to help students develop understanding of the mechanisms of vessels and adapt with advanced technologies. Despite the challenges brought by the COVID-19 pandemic, MMMA has found ways and adapted with the new normal in compliance with all safety precautions and protocols.

Arcadia Shipmanagement received the 2020 CAREER4SEA Ship Operator Award for their commitment to seafarer career development by providing from cadets to senior officers and their commitment to quality training through the Arcadia Training Center as skills and knowledge required to function effectively and efficiently on board and ashore. The company designs and conducts training courses in compliance with the latest national and international rules and the use of Ship Simulation Systems where applicable.

Arcadia Shipmanagement recognizes the mariner’s training impact on sea transport of oil and is committed to quality training policies. Arcadia Shipmanagement provides employees of all departments with equal opportunities to join in service training programs delivered by Arcadia Maritime Training centre. Graduates of Arcadia’s Maritime Training Center have the appropriate competencies to perform and execute required tasks in the jobs that they have been trained. Trainee students acquire the required skills and knowledge to function effectively and efficiently on board the vessels and in the shore-based Office. Arcadia’s Maritime Training Center complies with the requirements of DNV-GL Standard for certification of maritime training centers. The company continually improves its training standards to meet the constantly changing needs of the shipping market.

‘’My First Maritime Work Experience” program  launched by the Panama Maritime Authority (AMP) received the 2020 CAREER4SEA Initiative Award for providing young professionals in the maritime sector, the opportunity to obtain their first work experience to learn first-hand about the different services that the AMP provides, both nationally and internationally.

In early 2020, The Panama Maritime Authority, through the General Directorate of Seafarers, began the program called “My First Maritime Work Experience”. It is inspired by the project that became Law 121 of December 30, 2019, “Learn by Doing” (Aprender Haciendo), carried out by the Government of President Nito Cortizo. The program aims to to provide young professionals in the maritime sector, the opportunity to obtain their first work experience to learn first-hand, about the different services that the AMP provides. The first recruitment was carried out through the Panamanian Association of Merchant Navy Officers (APOM) and the Maritime University of Panama (UMIP) who put forward the candidates. Among others, 8 ladies and 12 gentlemen, who come from the maritime sector with careers like Nautical Sciences, Naval Construction and Maritime Administration, participate. The apprentices will receive a salary for 6 months and will go through a training period. Through the program, the Panama Maritime Authority aspires to enhance their professional knowledge acquired in their offices and help to train the new generation by exercising the day-to-day work within a secured environment.

Mr. Theofilos K. Xenakoudis received the 2020 CAREER4SEA New Generation- Men Award for achieving a remarkable career in shipping acting as a role model for young shipping professionals. Mr, Xenakoudis joined the Piraeus office of International Registries, Inc. (IRI), which provides administrative and technical support to the Republic of the Marshall Islands (RMI), in 2001 as Business Development Manager. In January 2007 he was promoted to Managing Director of IRI’s Piraeus office and then in 2015, he was promoted to Director, Worldwide Business Operations.

Theo Xenakoudis joined IRI’s Piraeus office in 2001 as Business Development Manager after serving in the Greek Navy. In this role, Theo was instrumental in assisting with the promotion of the RMI Maritime and Corporate Registries in the Mediterranean region. In January 2007, Theo was promoted to Managing Director of IRI’s Piraeus office and continued to strengthen IRI’s relationship with the maritime and corporate communities in his marketing territory. He has also expanded the reach of the Piraeus office to include markets in Turkey, Italy, and Monaco while still maintaining a strong relationship with the Greek shipping community. In April 2011, Theo was given the additional responsibility of serving as IRI’s Worldwide Business Operations Officer, and in February 2015 was promoted to Director, Worldwide Business Operations. Theo holds a B.S. in Transport and Shipping (Insurance and Maritime Law Pathway) and received his Master of Laws (L.L.M.) in Maritime Law from the Business College of Athens, in association with London Metropolitan University.

Mrs. Despina Panayiotou Theodosiou received the 2020 CAREER4SEA New Generation – Women Award for achieving a remarkable career in shipping acting as a role model for young shipping professionals. Mrs. Theodosiou is joint Chief Executive Officer of TOTOTHEO MARITIME and President of WISTA International and board member of various organizations like the Cyprus Shipping Chamber and the Cyprus Maritime Academy.

Despina Panayiotou Theodosiou is joint Chief Executive Officer of TOTOTHEO MARITIME, a leading global supplier of equipment and services for satellite and radio communications. Since 2017, Despina is President of WISTA International, having previously served as the Secretary of the organization from 2015 to 2017. She is also board member of various organizations like the Cyprus Shipping Chamber, the Cyprus Maritime Academy and others. In December 2017, Lloyd’s List selected Despina as one of the Top 100 Most Influential people in shipping internationally and she attained a further credit as one of Lloyd’s List’s Top 5 Next Generation executive. She has won the titles of “Top Professional” and “Cyprus Business Woman of the Year” In 2017, she was named as the “Woman of the Decade in Innovation and Leadership” and one of the “10 Women to Watch” during Norshipping. She holds degrees from the National and Capodistrian University of Athens, the Copenhagen Business School and the University of Oxford – Said Business School.

Ambassador Carlos C. Salinas received the 2020 CAREER4SEA Personality Award for being among the Philippines’ distinguished business leaders who has helped steer the advancement of the country’s maritime industry over the last four decades. In 1979, he founded Philippine Transmarine Carriers (PTC) and through his pioneering efforts, Ambassador Salinas opened the doors for the Philippines to be considered as a leading source of manpower for the maritime industry.

Ambassador Carlos C. Salinas founded Philippine Transmarine Carriers (PTC) in 1979. Through his pioneering efforts, Ambassador Salinas opened the doors for the Philippines to be considered as a source of manpower for shipping. Today, the Philippines is the largest supplier of seafarers globally. In 2014, Ambassador Salinas, in cooperation with the Philippine DepEd and ANGKLA, embarked on Project Balanghay to pilot the Maritime Track for Senior High School. The program equips senior high school students with the competency and technical skills to qualify them for shipboard employment upon completion of their secondary education. When Ambassador Salinas was appointed by the IMO as IMO Maritime Ambassador in 2018, he expanded InterManager’s Adopt-A-Ship program, now referred to in the Philippines as “My Ship, My World.”

About CAREER4SEA Awards
CAREER4SEA Awards are part of the CAREER4SEA Forum within the scope of promoting the dynamic profile of the Shipping Industry and the career opportunities to the younger generation. The process to be employed is a combination of open nomination and vote. The award categories are:

CAREER4SEA Educational Award
To be awarded to any organization (University, Maritime Academy or other institution) that has advanced maritime education in any aspect, acting as an industry leader developing younger generations in shipping

CAREER4SEA Initiative Award
To be awarded to any organization or association that sparked, initiated, implemented or promoted any idea to either develop or attract new generations in shipping